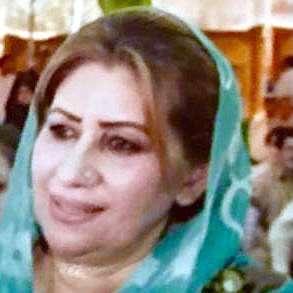 Ghazala Gola has served in Balochistan as the Minister for Women Development Minority Affairs and has always worked for the women of Balochistan. She is an agriculturist by profession and is also a social activist who has always raised her voice for the public welfare and worked to uplift the socio-eco position of women. She is the first woman politician in Balochistan to be in the parliament and is presently serving as President PPP Women Wing in the province.

Ghazala Gola has been working for women’s rights for 20 years. During her office, she moved several bills in a bid to provide rights to the women, including home-based workers bill, domestic violence bill, women harassment at workplace bill, women health, and education-related bills.

Besides SZABF, she is also a member of many other foundations which are working for women’s emancipation, such as Aurat Foundation, NGO CC Balochistan, NATPOW, and many others.