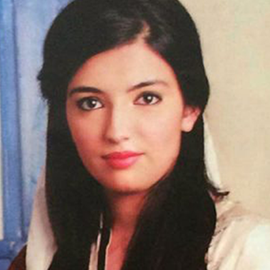 She was born on February 3rd, 1993, to former Prime Minister of Pakistan Benazir Bhutto and former President of Pakistan Asif Ali Zardari.

Aseefa Bhutto Zardari is the first Pakistani child to be administered polio drops by her mother, who then initiated the national immunization campaign to eradicate polio from Pakistan.

She completed her bachelor’s in Politics and Sociology from Oxford Brookes University, UK and pursued her master’s degree in Global Health at University College London (UCL). She aims to utilize her education for her commitment to the cause of a healthier Pakistan.

Following in the footsteps of her mother, Aseefa Bhutto Zardari aspires to ensure a polio-free Pakistan. Being the UN Ambassador for polio eradication, she collaborated with Pakistan’s previous government and helped in eradicating polio from Pakistan by 70%.

Lending a helping hand in improving the health sector in Pakistan, Aseefa Bhutto Zardari has been paying visits to different healthcare centers, engaging with the management to stay updated about the facilities as well as requirements – in order to play her part effectively.